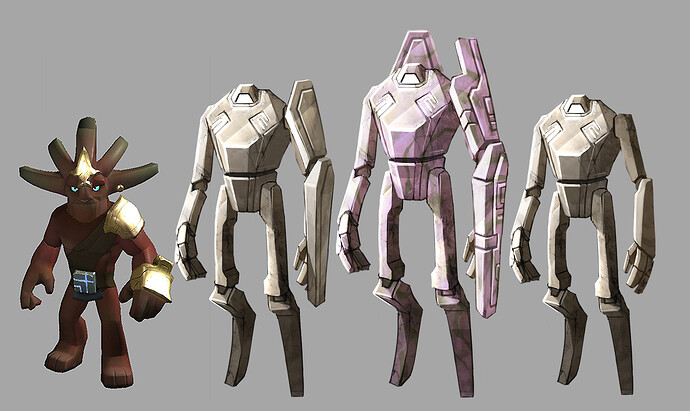 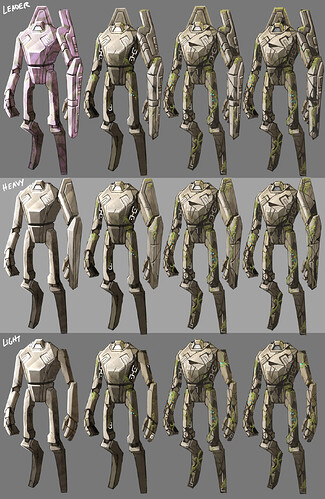 Update on the Protectors - your new dazzling enemy that will be happy to wipe you off the map if you get too close to their hidey holes. They will lurk in Temples and on Titans.

Some extra concepts to consider such as them having wearables and customisation. 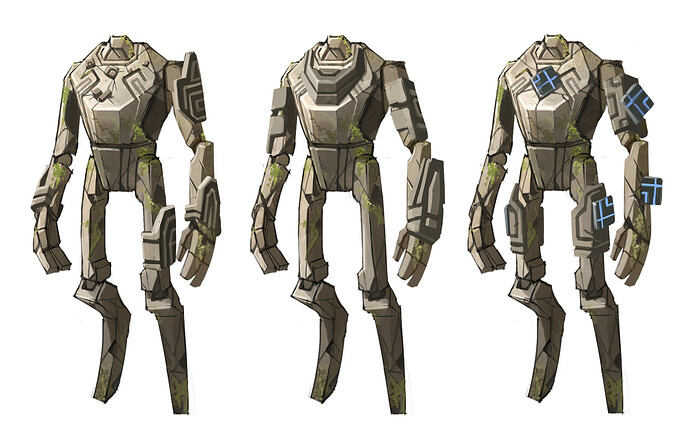 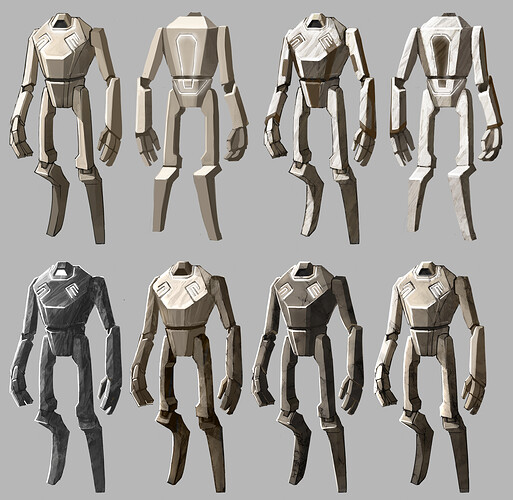 your new dazzling enemy that will be happy to wipe you off the map if you get too close to their hidey holes.

Loving the look of these! Is the middle one in the first picture some kind of commander or higher spec protector?

Would love if you do wearables for these, that they drop exactly what they have equipped!

It would be kinda cool in general to have something for mobs like what pokemon did with spinda. So there could be random bits of moss or cracks or discoloration and they would randomly be put on each mob so they look slightly different. Would add a pretty nice touch~

they’re all cool, want them to see in game those thing wandering around

Awesome, has a definite droid from star wars look. Very interested in how this subject develops

I smell a techno-fantasy backstory, and it makes me very happy

Funny that you should say that, I got a message from our composer recently that said: “… we can ramp up the excitement and tension with some nntz nntz nntz.”

I didn’t know if I should have laughed or cried.

Think I did both…

This is…different. I do like them,but the style (look) of the game is turning out to be a lot more different than I first thought it would. And I get that things change,like the Titans went from gigantic creatures,to gigantic floating temples,that’s fine. But to see another major difference in design concept,just kinda bothers me. I mean I thought the Protecters would be a whole bunch of different types of ogre and or and goblin white creatures,that were bent on protecting the Titans from looters and explorers,but by choice.
These look like mechanical machines that are being controlled by the Titan to protect itself, which is still totally freaking awesome, it’s just a lot different from the original plan, at least how I saw it,was.

These look like mechanical machines that are being controlled by the Titan to protect itself, which is still totally freaking awesome

Way to look at the bright side

I agree, @G-Sage, I really did like the more organic and natural titans/enemies earlier on. Nevertheless, I think the devs are pretty set on what they’re doing now, and, after all, they usually know what is best.

Way to look at the bright side

I only hear what I want to

Of course,I wasn’t trying to make them change the concepts,just simply voicing my opinion.

I always kinda assumed that the titans (and by extension, protectors) where automatons built to protect the Oort that ended up either outliving or destroying the Oort. For that reason, I kinda expected a mechanical re-design. The organic ogres didn’t seem to fit the lore of “advanced but extinct alien race” to me.