We were only able to update the game with bug fixes this week but we have not been slacking off.

The following 1st pass functionality development by our engineers have been completed:

They’ll be released once we’ve done some more internal (functionality / usability) testing and finish implementing their 1st pass GUI. We are in the process of replacing the current inventory + handcrafting UI with a new version so that we do not have two different UI in the game. Also, the Dual Wielding UI is proving to be a bit tricky to design / implement. We are hoping that the UI will be good enough so that we can release some of the features above next week.

Our engineer’s first pass World Builder update and Resource Regeneration have also been completed. We are in the process of reviewing the changes and the new functionalities to see if they are at an acceptable quality for release. Also, we need to do some internal testing. We plan to release these soon too.

Sorry that these have been slow… but the wait will be worth it.

The next big things we will be tackling will most likely be Currency (Selling / Trading) and Player Progression. Oh, one more things, we are tweaking some of the blocks so you will see some changes with them in the next release.

Code
This week we have being adding the resource regeneration to the world builder and game engine. The resources are distributed so that they harder they are to get to, either deep underground or deep inside a mountain (say) then the more likely you are to find something valuable. This system with a little extra complexity is to make sure that resources also spawn in floating islands, glaciers on the surfaces, and huge mountains or volcanoes - to give a few examples. 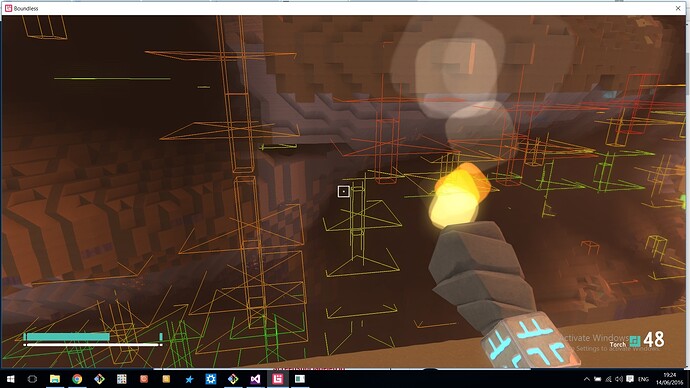 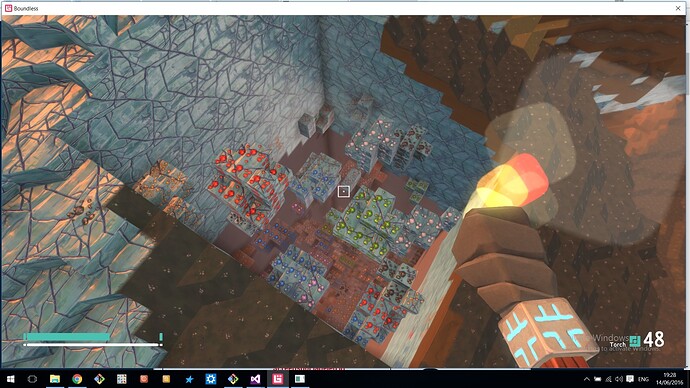 The locks have been implemented and are are nearly ready. You can lock interactable items such as storage, doors and machines inside beacons. Locks don’t work outside beacons as players could easily remove the lock before accessing the device. There have been quite a few edge cases that we’ve needed to deal with, for example if you build a set of doors on the boundary of a beacon - with one door inside and the other outside. But who would build anything like that? We are polishing up the machines to make them more usable and adding in more of the items.

Checkout some more details about Locks from @dave here.

We’re continuing to work on getting the updated shaders to work on all three SKUs (Windows, OSX and PS4).

We’ve been working on the Boundless art tools, fixing up various export issues and tools.

The GUI has been adding in more polish, like physical responses (wobble) when items are placed to reenforce the physical nature of the GUI and Boundless universe.

The server deployment has been worked on to make it more scalable and adding some more test servers.

Design
This week we’ve managed to get some world colour palettes generated and ready to be looked at in game. The tool uses some clever colour theory to generate sets of colours which are broad, but where the colours complement each other. Hopefully we can get the palettes into game soon and see how they look. There will be a fair amount of work to get them to look great after seeing them in their natural setting, but the tool will allow us to do that. Roughly speaking, each block will have over 200 unique tints that will be exposed into the world builder and used during generation. These colours will then flow through the crafting system and tint al the items you craft and place in the world.

@lucadeltodecso has added some great features to the world builder, and we’ve started using the new version to make a library of new nodes to make the creation of further biomes easier.

GUI
GUI in-game is more functional and nearing a releasable state (now with the 3D depth and weight animations). It’s still missing proper icons and assets, but here’s a gif of our work-in-progress Inventory in action:

Earlier this week we posted a contact sheet of all the new icons palette soon to be included within the new GUI, including the four different icon weights.

Art
This week has all been about character race design. We’ve concepted a wide range of potential player characters. They’ll be shared soon.

Other concepting this week:

We’ve been playing with some example worlds and spent some time iterating the new block textures. We want to ensure they are as aesthetically pleasing as we can make them when the worlds are procedurally generated.

Animation on the Cuttletrunk has continued this week - we’ll post on this new creature in the near future.

We’re off to watch

First of all FIRST! And second omg cant wait to try this stuff

^ What sike said. This post increased my hype for Boundless from “hype” to “HYPE”

So excited for the addition of underground resources, so I can mine to my heart’s content

Roughly speaking, each block will have over 200 unique tints

OMG! So much colour!!

Next week is shaping up to be a great week already! Looking forward to seeing what new toys we get to play with

Also looking forward to seeing the new GUI in action when it’s finished as well.

@james, just for clarity’s sake, will we be seeing some of those lovely, shiny resources in the glacier picture with the next release? Because if so I need to clear my calendar so I can spend hundreds of hours over the next few weeks exploring your game’s beautiful caves to find and hoard those ores

This is the important question. I need to know asap so I can adjust my work schedule!

Hiho, thx for the update, and again I have a few major questions:

Locks don’t work outside beacons as players could easily remove the lock before accessing the device. There have been quite a few edge cases that we’ve needed to deal with, for example if you build a set of doors on the boundary of a beacon - with one door inside and the other outside. But who would build anything like that?

Why don’t you make locks also work outside? would it be complicated? (Even when useless?)
If someone wastes his mats for “outside locks”, it’s his own mistake. He will learn of it

Because, then your mentioned “edge case” would not be a problem anymore. Something beginning inside a beacon going to outside would be all locked, when the lock is inside the beacon next to the item.

These colours will then flow through the crafting system and tint al the items you craft and place in the world.

Here I am more curious. I assume, that an item, crafted from another item, takes the color code of the item it’s made of?
If that’s right… what if you create something with blocks of different color codes? or is that not possible?

Why don’t you make locks also work outside? would it be complicated? (Even when useless?)If someone wastes his mats for “outside locks”, it’s his own mistake. He will learn of it

I think this is what was meant by the edge case… while technically you could create a door outside the beacon that was locked by a lock placed within the beacon, it would be pointless, as you could just break the door (or the container, or whatever). Or even if you placed the lock outside the beacon to lock a door/container within, you would just break the lock (plus I would imagine that they wont have any permissions automatically applied to the lock as there is no ownership involved if it’s outside a beacon).

Any update on the next community survey?

Any update on the next community survey?

We were trying to get it done last week - but I didn’t have time to finish it. We’ll hopefully have it out Tue or Wed.

Yay! Another weekly update. Interesting stuff, can’t wait for that new GUI gif for next week. I’ll add those other screenshots to the collection.

Question when does the game release fully?

I think we’re currently expecting late November 2016. That being said, I would not be surprised by a mid 2017 release.

Look at all the things I can break…

holy cow, I cannot wait for the next update

Starting work on a new lighthouse?