This week we’ve mainly been reviewing and fixing all the issues raised with Testing 161. We’ll likely iterate another Testing update before we consider releasing these changes to Live on Steam. 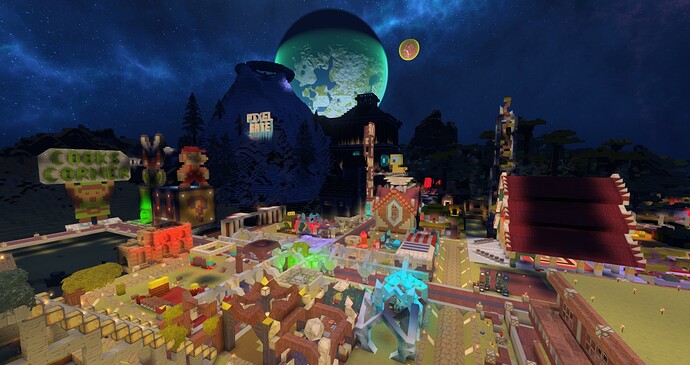 We have also spent a chunk of our time playing the game from the Tutorial to identify areas to make improvements on. Hence, this week has been about fixing bugs and working on the plan to make improvements. We have also been working on some new features too. We are hoping to update the testing release of Boundless again next week with the following:

Code
There has been further work on the revamped tutorial including re-adding the Elder character. For Objectives and Progression we’ve added more movement tracking Statributes. As part of progression we’ve also been experimenting with jump logic upgrades.

The GUI reskinning is working through the Machine, Beacons and Progression interfaces.

We’ve added support for attaching VFXs to the different character joints for glowing status effects experiments and additional fade out logic. A few bugs have been tackled including the bright fog in lower caves.

For the PlayStation 4 we’ve been fixing up some Trophy code and further work on the memory manager. Lots of smaller changes have been worked through including reworking some of the fundamental data types to help productivity.

Design
Monday morning this week started with a full team playthrough to look at all the changes that have gone in, but specifically the tutorial and initial objectives. It was a very useful exercise, and threw up a lots of feedback from everyone.

@olliepurkiss went through all the playthrough feedback, sorted it and categorised it. We then worked to come up with some changes and polish tasks for the next iteration. He also worked with Rob on the Forge, and has started writing up what will hopefully be a comprehensive first-pass design for the system.

As well as taking part in the playthrough, and working out the next steps for the tutorial and objectives, @luke-turbulenz has been fixing bugs and working with @lucadeltodecso on updates to the character jumping to incorporate variable jump heights (based on skills) and the double jump. Towards the end of the week he started implementing the changes to the tutorial and objectives.

We shared some data about the latest resource changes to help players understand the current online Live worlds.

As requested in a few different threads, below is some raw data about the resource distribution in the current Live servers of Boundless. We wouldn’t normally share this data publicly because it could be considered to be game breaking. But during this development period I think it’s more helpful for players to be informed about how the game works to then better understand the progress. In general I think about resource distributions as: The RAW data for the number of each resource type in th…

Rob, who obviously was also involved in the playthrough, was working with Simon on the updated warp UI, and with Marc on the updated skill tree UI. The rest of the time has been working with Ollie to wrangle with the complexity of the Forge and come up with an engaging, but understandable feature that will keep the keener crafters amongst you interested. The Forge is the machine that enhances your gear with special features, making them unique and special.

Here is a work-in-progress capture of the forge, tentatively named the “Centraforge”:

Art
Progress has continued with the new system of majority of the 1st person tool animations which will share the same default positioning, core animations and perspective for consistency. Some of the new features @gerryjacobs and @dave have been looking at this week include splitting the swing animations of the tools (hammer, chisel etc) into a hit or miss action depending on if contact has been made with the block mined. We plan on matching the animations with the trigger cues for SFX and VFX which will provide a much more responsive 1st person experience.

Big progress with the face and head customisation options for the new character models has also been made in the art department. Here’s some of the work @jesshyland has shared with the team this week. During character creation you will be able to select a face and head piece combination. 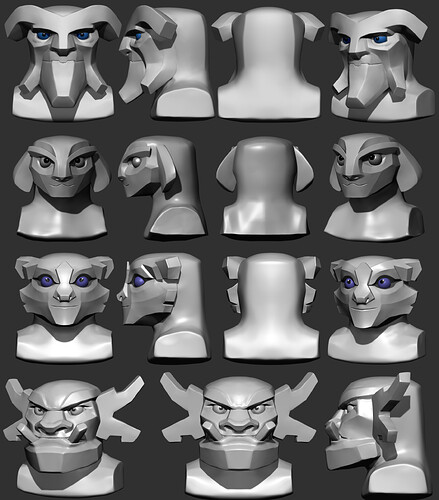 Finally here’s the latest glimpse of the ‘Pole System’ that @Minyi has been busy visualising through her concept work. In particular she has been looking at connecting different widths with the hope that you will be able to walk through some and not through others.

She has also been exploring the visual value of the core materials so that wood does not become devalued in terms of decorational aesthetics. It therefore wouldn’t be necessary to link a wooden build to the lowest tier of prestige. 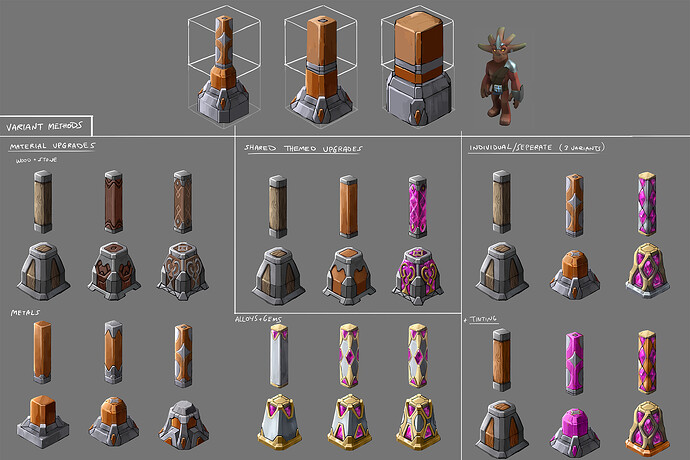 Wow, like that forge concept … hope it’s possibilities are BOUNDLESS … not only because it sounds cool ^^ … Hope that we will have a slight RNG included so that there will be no simple formula for each “min-maxing” method but also a random component with possitive and negative side effects, so that each item really is unique (and also so that there is allways a even better roll for the item)

The forge is awesome, I want it.

And I’m glad wood won’t be lowered in prestige just from being wood. I get that wood holds lower prestige as it’s easier to get. But I love to use wood. A building having higher prestige, doesn’t mean it looks more interesting or more appealing, which is also completely subjective too.

Anyways, I’ll keep building according to personal taste, instead of prioritizing prestige.

On an additional note. I’ve been pretty annoying with the reports. I even annoyed myself. Hopefully the things I reported were useful.

Looking forwards to getting my hands on that Forge / Centraforge

It looks complicated, but lots of fun!

For the character faces, will we also get the choice of using the existing current in-game faces as well? I am really sorry to say, but I am not a big fan of either of the 2 male character faces (they’ve lost a little too much of the feline-esque appearance to them compared to the female ones)

The current faces will still be options, yes.

Will the lvl up Bug Be fixed and do we get a reset yet?

In test or live?

Next update will go to Testing, and we’ll likely reset all player progress so that everyone can test + experience the tutorial and objectives.

Still can’t lvl up or havent you updated the testserver yet?

This is just devblog with the plans. The release isn’t up yet. But as mentioned it’s gonna be either this week or the following.

Next update will go to Testing, and we’ll likely reset all player progress so that everyone can test + experience the tutorial and objectives.

did you really just decipher that? cool!

It’s not to often hard I keep the index on my phone and computer. Just cuz