So, this is super simple.

This idea would be to figure out a way for beacons which are large enough and are powered with Gleamclub to have the ability to black-list some weather effects.

Here’s a quick mock-up I did. 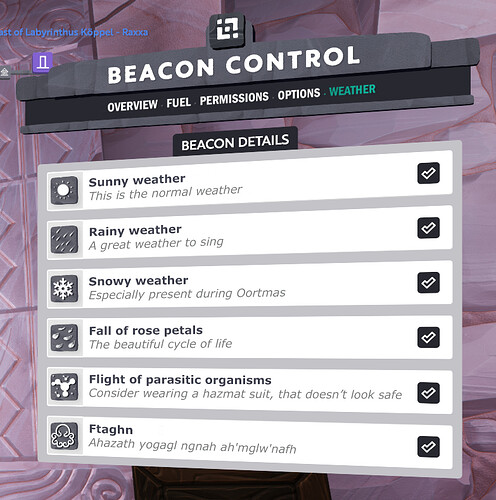 WeatherControl.jpg783×789 329 KB
I surely missed a lot of weather effects, I was too lazy to search for an actual list, so I wrote random stuff from memory.

Point is, maybe there could be something like that only for some players.
I think it would make sense to only make this feature available for settlements that have a large surface of plots. If you have a Gleam Club, a huge amount of prestige, and all that in a 1x1 plot space, but like 200 plots stacked-up in a tower, it couldn’t work to localize the weather to just one plot.

But aside from that, what do you think should be required?

The Weather Control should be a feature available…

I would personally make it a Gleam Club feature to increase the value of GC. It’s not something that players need, so it would have its place there.
I would be quite happy to be able to get rid of the snow during Oortmas, and maybe have a nice place where basically the only weather you’d ever get would be the fall of rose petals.

EDIT :
Another interesting option could be a Weather-Machine.
The machine would affect a radius of plots instead of a beacon.
The machine would work like a Guild Helix, it would have various modes, such as Minor, Improved, Super, Greater, Mega. It would also have about 3 slots, so that the player can affect a maximum of 3 weather effects.
How much radius does each size-mode equals to, that’s to be discussed. Should Mega have 100 plots of radius?
The machine would propose the player to increase or to reduce any effects available in the region (snow would be available in all regions during Oortmas).

The machine would consume a fuel (Elemental shards come to mind as they seem somewhat thematically fitting), but if the beacon is powered by Gleam Club, the machine would require no fuel or repairs.
If there is a machine owned by another player already running nearby, yours would refuse you to enable some size-modes if they overlap with the other machine that was activated before.
Arguably, if your machine is to have the same effect as the other machine, it could however work.

Anyway, this Machine idea brings a lot more things to work through, but it could be interesting.
So because the first poll wasn’t all that great, here’s a new multiple-choice one!

GB for any beacon, and free after certain prestige.

I would allready be happy if i could remove the Ground steam coming out of my build on the 3rd Floor and up at times. On Maluralakrib i cant even continue to build at that spot for seconds, yes you laugh seconds, and it is very irritating.
MC has it as a Standard Setting, Maybe we get it one day.

Yes for this because it shouldn’t rain in a enclosed dome. Also ability to turn of fog effect.

Cool idea, this could be craftable own machine or part of atmosphere protection machines if we get something like that one day

Yes! Let us remove weather effects inside our beacons!

You must’ve forgot to patch a leak somewhere in the dome.

At least it isn’t built underwater.

Hmmm if the rain gets in wouldnt water get in too. Could place water above and see where it leaks in

not all weather effects collide with terrain, and even those that do, the resolution of the collision detail for the weather systems is not detailed enough to allow accurate collisions against square/bevel/tetra chiselled shapes, and will often act like they just aren’t there.

even water will be forced to pass through blocks that are chiselled on “both sides” as we cant encode liquid existing in one “half” of a block only; but this is still a much stricter condition than that of weather particles, so weather particles like snow/rain may well pass through terrain that is detail chiselled where liquids would not flow.

weather effects that do not collide, may still modulate by the sunlight, so if you have a completely enclosed with no-windows build, you will often get different effects too.

there is a plan to help improve the case of modulation by sunlight, so that it acts like the snow-covering effect where it is able to somewhat distinguish sunlight filtered through solid translucent blocks like glass/leaves vs unfiltered light which would help in those cases.

the collision granularity however is not currently in scope for improvement.

Far as I know the dome has no chisel spots. That’s why I suggested using water to find the spot.

My beach project could do with some 24/7 sunny weather!

Yes none of the glass is chiseled what so ever. I guess I can put water blocks down. Currently doing a project of laying around 100k seeds though…could I pull my self away…idk

Weather machines would be the more fitting approach. Maybe powered too? Sort of like atmospheric terraforming of sorts?

Not only should you be able to stop certain weather, but you should be able to create weather within a beacon of a certain size, and perhaps even change a caustic environment into a temperate one? This would be very useful for new players that are travelling through the HUB system without protection.

I prefered the simpler GC feature because it would require less ressources from the devs, and it would feel like a customization aligned with the ability to color signs.

I would personally be quite un-happy with a new machine which would likely require fuel to work, or regular repairs.