Ok so you might’ve seen the big thread of Gameplay-based suggestions posted previously. If not, well, there you go : [CRAZY IDEA] Bunch of Gob's Gameplay suggestions

Here, imma write a recap of Building-based suggestions. Suggestions that would make our ability to build that much cooler. Some suggestions, I’ve already made in the past, so I’ll make put up link to the older threads.

First, let’s address the obvious elephant in the room…

I made a quick mash-up of concept-arts we’ve been teased with (I believe @Minyi is to be credited for these), and I forgot quite a bit (like the placeable-creature-totems). More (if not ‘all’) of this stuff needs to be added into the game. 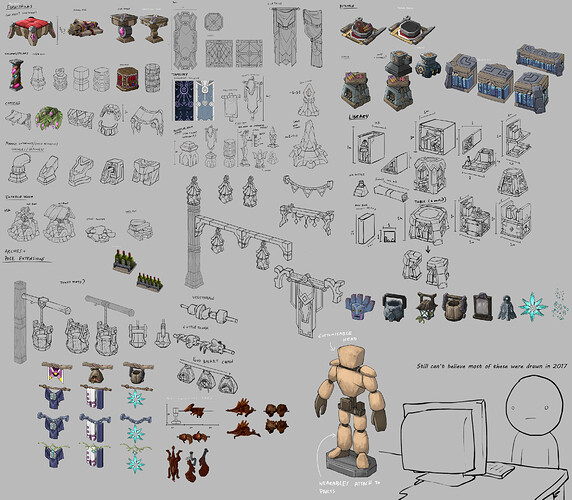 Boundless-What-Is-Missing2910×2540 2.29 MB
And even then, these don’t really encompass a lot of basic furniture like new chairs, tables, beds, different types of lamps/braseros.

Pretty straight-forward : a chisel which transforms a block into a column (or cylinder). This could be achieved with a forged boon.

Also fairly evident, a boon for a chisel, when you hit a block with it, it will change the rotation of the texture when applicable, such as the blocks where the direction of the block-texture depends on the face you placed the block on, such as this one : 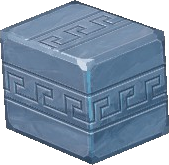 I would believe people would love another new liquid which wouldn’t be opaque like Lava, Resin and Pretrolim… maybe something that looks a bit ‘magic’ or ‘holy’. Could have a rainbow-ish shine to it, or like the Oortshard texture, as if you can always see stars in it. Here and there, some light particles could fly up from the liquid from time to time.
Imagine if swiming in it healed you and allowed you to breath when diving! People would want that in their hubs everywhere! It would also be a nice way to decorate builds. Maybe it could “transform” water into more of itself. Maybe that liquid could ONLY be crafted, never found naturally.

How would banners work? Would we have 3 banners and we just change one of their colors as usual? Or would we get some kind of new banner-making machine where we are in full control of the design making process, pretty much like the banners in Diablo 3? 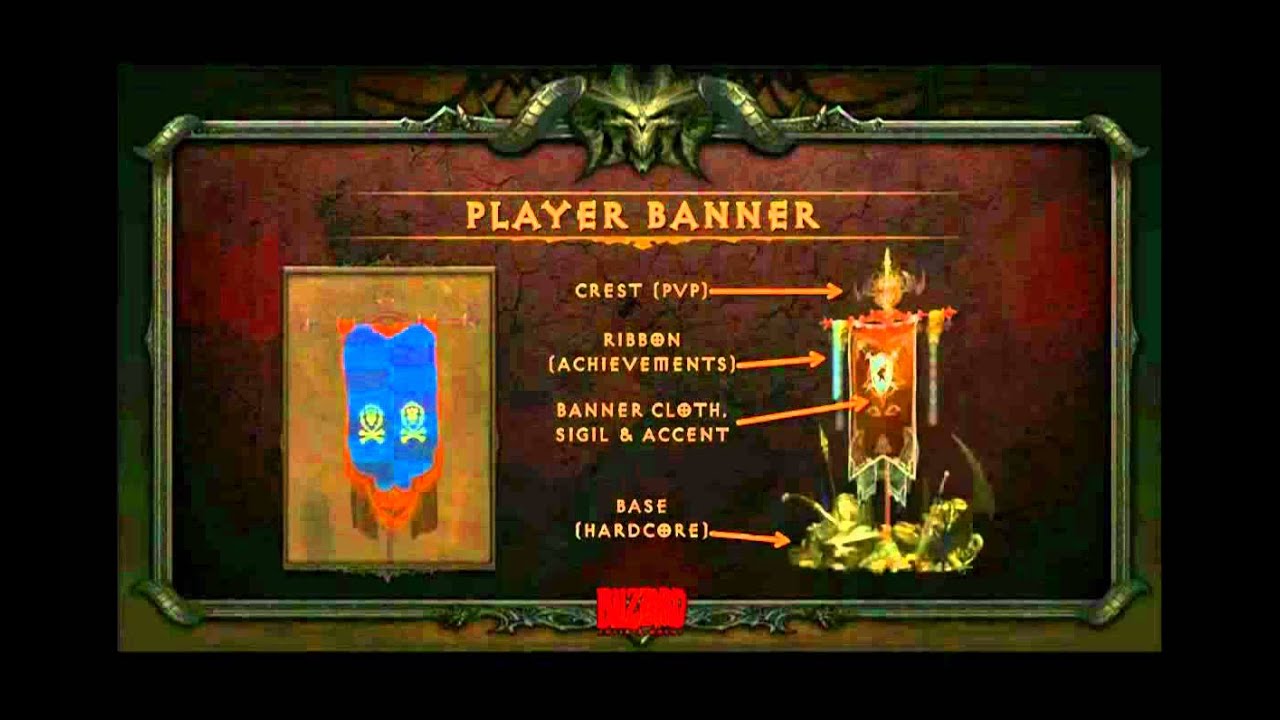 It’s been talked about in late 2019 if I remember correctly that there would be a new way to display items without having to use a clonky selling-plinth. A better option would be to allow that display item to stick to walls and ceilings, and to have a way (likely through forged chisels because why not at this point…) to hide the displayer itself to only see the displayed item, which would give players great decoration opportunities.
Creativerse handles that features through an item called the Placemat. I took a moment to record a quick run-down of how it works on my world : 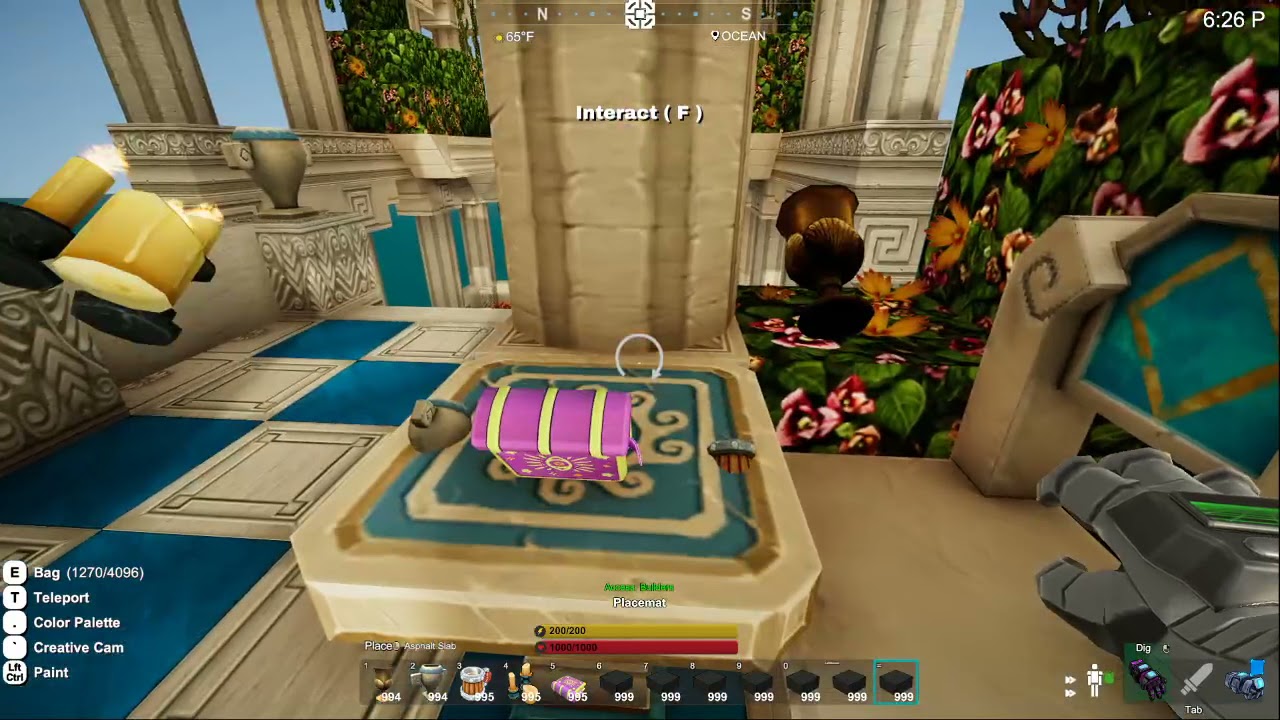 Boundless lacks ONE specific type of tree-leaf : a block with flowers.
So here’s a suggestion. Some kind of decorative seed which can be planted in soil AND in leaves. It would grow small flowers (a bit like the Rosetta Nox or the Gladeflower) on every visible side of the block. No prestige there, just decoration.
These could occur naturally in the world to spice-up a bit the look of trees. You could even have some trees that would end-up looking like japanese cherry-blossoms.
As an example, in Creativerse, for every block of tree leaves, there’s a variant with flowers embedded in it : 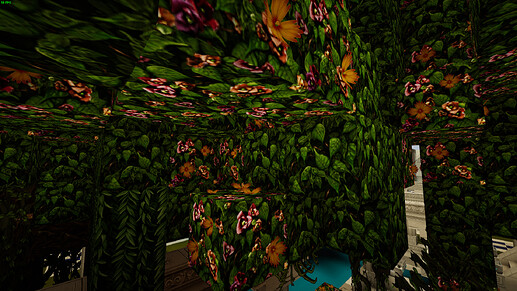 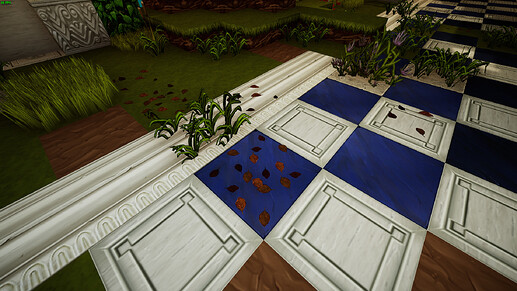 Since the earliest days of the Trelling Block on testing, I’ve been saying it looked bad, so much so that I refused using it in my builds. INSTEAD, something A LOT better would be to have some kind of Leaves panes that work a bit like a sign in terms of placement, and would look like this : 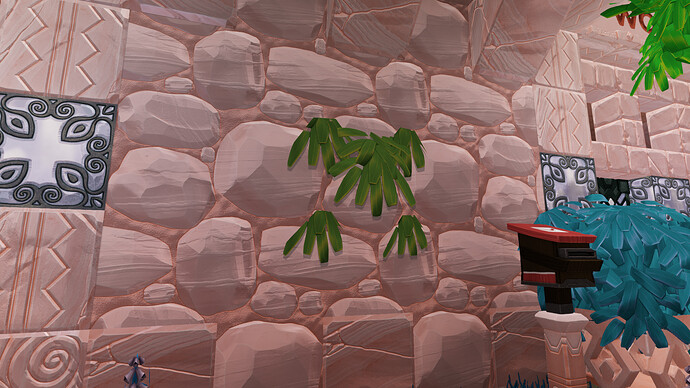 1920×1080 1.45 MB
Alternatively, there could be a texture (or a model) of tangled roots behind the leaves to increase the coolness value of the result.

Basically, ways of move quickly vertically in a build which doesn’t imply a grapple or stairs, as seen in the old concept-arts Art: Ladder/Climbable surface concept 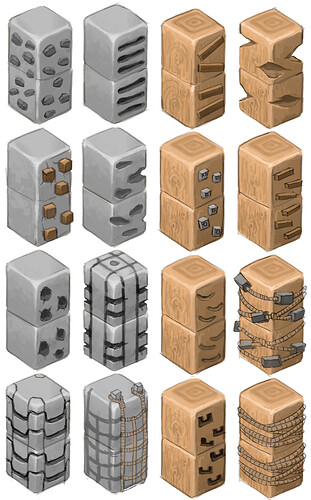 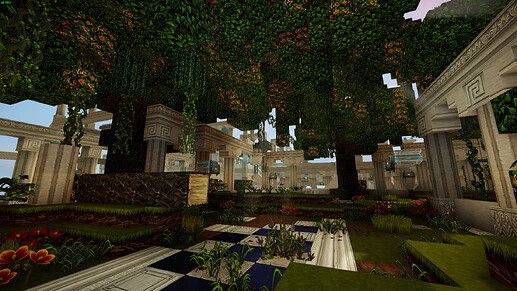 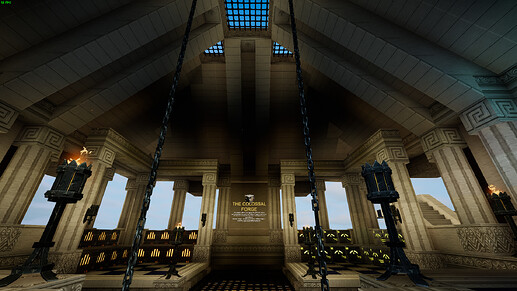 Long ago, I fought for the CRAZY IDEA : Weather control system which would allow the player to disable weather effects in a zone. At the time, it was unknown for us players if this was even doable.
In late 2020, Wonderstruck showed us that it can clearly be done by releasing a boon that forces a specific weather upon the user.
Hence, I see no valid reason to not have a device which forces on the player a specific weather effect while in a specific beacon or settlement.
Ideally, the device would offer its owner the option to set a ‘playlist’ of weather effects, with maybe a way to set the % chance per effects to occur.
If the player has an item in hand with the weather boon, it would take priority on the device, and MAYBE the player could have an option to disable the impact of weather devices, just in case.
We’re in a situation where some weather effects (< cough > snow < cough >) are really annoying because they are simply … ugly. At this point, even if the feature was for GleamClub users only, I’d take it. The device could even require some type of fuel, I’d also take it (but I’d be a lot grumpier about it). 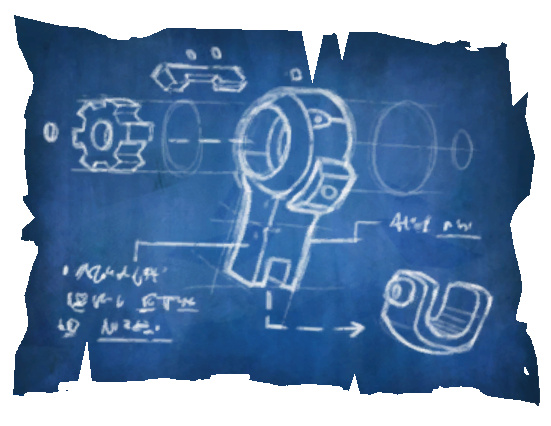 The Water-Spitter would be a new block device which would only work if a source-block of liquid is placed behind it.

WaterSpitter1095×1080 578 KB
It would then spit a stream of liquid in a ‘latticed’ shape.
This implies the addition of water in such small latticed shape.
Just imagine the water-works we’d be able to do!
The Water-Spitter could be placed facing down for a stream falling straight-down without the curve. Facing up, I’m not sure how that would look, maybe the curve of the stream would make a reverse-U-shape, falling back down in front of the device.

Several times in the past, I’ve mentioned how there should be a way for the player who does not care for farming or prestige to have his crops stay at a specific growth stage. This suggestion CRAZY IDEA : Chrono-stasis spray for Prestigious crops offers an elegant solution to all problems, with a new type of fertilizer. 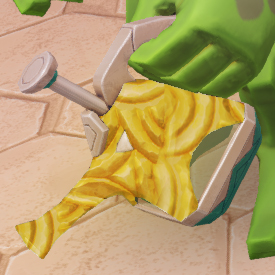 Imagine having a new type of item, a carpet, which would be placed like a sign, and would similarly have the smart-texture feature used with ornated glass panes, to have adaptating patterns depending on the shape you gave your carpet.

It would be great if there was a way (maybe once per chunk?) to have a book or a tablet prop which you could use to write down a long message (around 1000 characters), as described here : CRAZY IDEA : Guest book & Tablet
This could allow us to write some player-made Lore, leave clues for puzzles, or explain some guidelines or rules.

If there was a ‘golden book’ feature for people to leave a quick tweet-long message to say “I love that place!” (which gets deleted after been read if that poses a technical problem) or even just a

Like, even if that translates into no tangible gameplay benefit, I think I would’ve been more inclined to keep building. Y’know, login into my place, seeing “oh, a new like? that’s nice!”.
To this day, I still get people telling me they love what I did on Creativerse, because it outlasted me in the game. I think it’s wonderful to have a persistent world on which you can leave a lasting mark.

This suggestion goes along with the Oort Alphabet, we could imagine a numberpad using the Oort Alphabet. When interacting with it, the owner of the beacon gets a window where he can set the code, and another window where he can re-enter the code to activate the linked device (such as a door, trapdoor). A simple visitor would only have the window the enter the code. This would offer a way to make clever puzzles where you have to find the correct code! 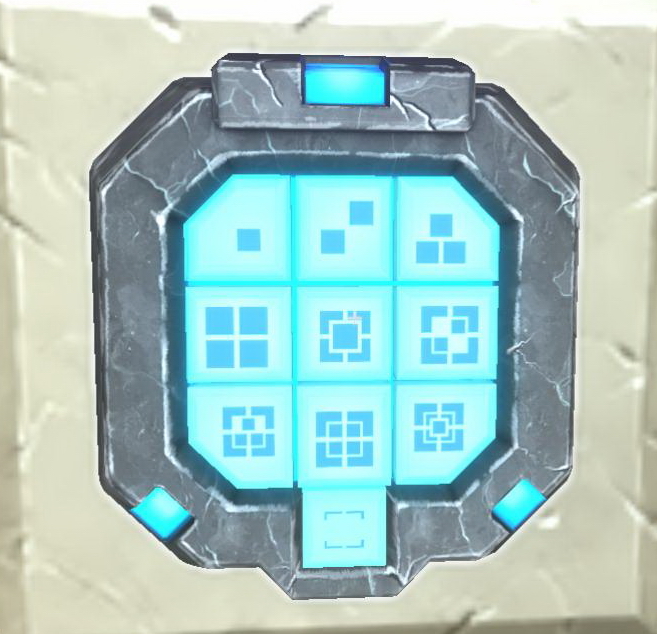 You’d place a lever similarly to how you place a lock next to a door or trapdoor, and it would allow anyone who has the ability to target it to open the door/trapdoor.
This would act as an override to some doors, or it could be a way to let players exit a room with a locked auto-door without leaving them the ability to get back in.
In the case of an auto-door, maybe the lever could set itself back to its original position when the auto-door resets itself.

As we spend money for these worlds to stay around, it seems important for us to have MORE control than what we currently have.
First, we need more control to override what individual players, or all visitors can do in our Creative World, such as a way to

Furthermore, we could also use some new tab in the World Control which allows us to rename the current region we’re in. We’d have to build a World Control in every region if we want them all renamed, but still, it looks to me like an ok solution.

When you own a big build < cough > which is definitely not something I can relate to anymore < cough >, you will likely want ways to go from one part of the build to another quickly. So we use portals. Which require fuel, and (I guess) can be a bit costly on the servers.
So we need alternative ways to go quickly from A to B on a same world.
This could be achieved via several ways.
• The best option (IMO) would be some sort of teleporter like the one described here : SUPER CRAZY IDEA : Teleporter
• The other option (requiring less work, I think) would be some kind of fuel-less copper-colored warp block which can only open portals to the same world, with a limit to how many can be used by a single player-account, as the one presented here : CRAZY IDEA : free portal token

I especially love the flowering blocks idea, I had suggested a flowering hedge block like that here way back (actually had a dream that gave me the idea), and then later on found the ones in CV when I started playing that - so, so useful for gardens, yards and all!

That would be a dream come true.

These are not crazy ideas, they are fantastic ideas which are perfectly reasonable and achievable if the will is there

actually had a dream that gave me the idea

The Water-Spitter came to me in a dream too.

Great ideas, thought id bump for those who had not seen…