Initial technical documentation for the Creative mode Lua server scripting are available below:

Below are some initial documentation for the prototype Boundless Creative mode and Lua server scripting. Setup of Lua: Using a slightly modified LuaJit v2.1.0-beta3. JIT is currently disabled! (Bugs that lead to hard-exits on memory allocation failures within Lua scripts.) FFI and dynamic-linking of C libraries is disabled, pure Lua scripts only. 5.2 Compatibility flags disabled, Lua 5.1 only. Modifications/Restrictions of the Lua standard library: package.searchpath which was exposed even w…

For all the details see the technical documentation:

Below are some initial documentation for the prototype Boundless Creative mode and Lua server scripting. Setup of Lua: Using a slightly modified LuaJit v2.1.0-beta3. JIT is currently disabled! (Bugs that lead to hard-exits on memory allocation failures within Lua scripts.) FFI and dynamic-linking of C libraries is disabled, pure Lua scripts only. 5.2 Compatibility flags disabled, Lua 5.1 only. Modifications/Restrictions of the Lua standard library: package.searchpath which was exposed even w…

Everyone plays in the same universe and its integrity is essential for a fair and consistent game. Botting is not allowed and action will be taken at our discretion against players who spoil the game for others. Botting is cheating.

If you want to bot or enjoy the technical challenge of creating a bot - then have some fun with the Creative mode.

Scripting input is allowed to help players with disabilities enjoy the game.

I’M SO HYPE RIGHT NOWWWWWW!!! I’m so ready to be on this new creative update and check it out! thanks again dev team!

My hope with creative mode is that players will be able to mod in new blocks, items or features that the devs can then choose to add officially to the game if they like it.

The game will now come packaged with a scriptable game server and universe (discovery) server executable and extra assets required to run them to enable experimenting with a creative game mode on PC only.

wait- i thought this was going to be available on console and PC?

Really wished there was a video by Jiivita about creative

There’s no GUI to do it on the PS4 yet as sony doesn’t allow debug GUIs, and that’s all they have atm.

I am not amused … the problem is not that it is PC exclusive but that the players have advantages over the console players.

lol…all those pm’s are finally catching up with me 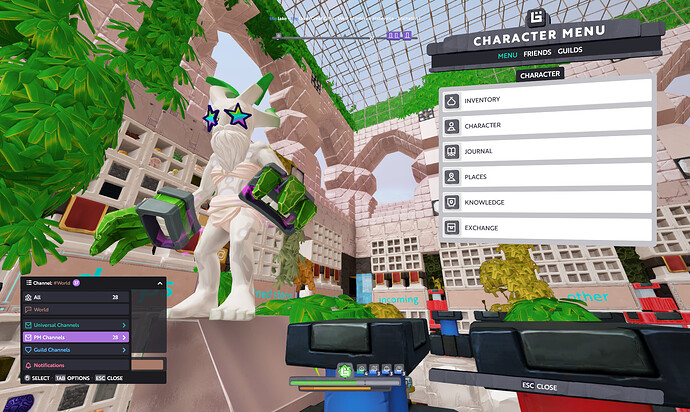 Thanks, this will be a big help!

I think this is why I tend to miss a lot of guild messages in particular, once I get to an exo and become busy, I tend to become oblivious to the new messages coming in.

Might just get the social part back into the game now (as in ingame, not having to use discord for basic chat).

If this works well… then honestly that is the biggest part in this update from my point of view, is/was a massive quality of life lacking for both ps4/pc players.

Update So far “longer” delivery time when on #all filter, usually was 4,5minute. now 6,5minute delay instead -.-

Alt account gets the guild messages on an interval of 10-20ish seconds (#All) filter, my main account… well 6 minutes and 27seconds intervals (#all) @James how many of my alts / guilds / friends do I need to delete / leave guild from to get 10-20ish second updates on my main? On the #All filter

@superman101 (i am ps4 to) Sadly sony blocks a lot of stuff. If not limits…
But I don’t see a point making a problem of it here…

The public universe channels are now included in the #All filter.

From what I understand and is mentioned this update gives a lot of potential. So yay and keep going our lovely Oortian dev GODS.

Seems I have a lot of unread messages

Great and promising news! Do i understand correctly that we can now create own worlds in which we can fly and build anything from free blocks?

If so, it’s very cool! I hope that in the future we will be able to move buildings from creative mode to permanent mode!

It is now time for this game’s population to explode.

I hope that in the future we will be able to move buildings from creative mode to permanent mode!

I highly doubt this will ever be a thing, I could see them going as far as blueprints, so you could have a client side hologram that you can basically ‘paint by numbers’ the blocks into the right place - would be pretty cool

Only pc player can use the Creativ mode???