For the past few weeks we’ve been focused on polishing up the Player Progression and Build Progression features and releasing them Live for all players.

This has resulting in 4 main releases:

In general we’re attempting to complete features that have been partially developed and release them Live for the community to play with, this includes:

The aim of focusing on the quality and completeness of these feature areas is to have a solid core experience. Once this is done we can start thinking about calling the game Alpha and evaluate which additional features need to be implemented before 1.0, and by association the features that will be included in post 1.0 updates.

Code - June 23rd
This week we updated the live version with the features seen on the testing branch and working through the issues, such as the portal collisions, and general polish.

The objectives continue with up the weekly and daily challenges. The GUI has been working through the trading and universe screens as well as starting a pass over the Feats UI. The block placement visualisation has been tweaked to make it more obvious when you’re inside a beacon.

The new wildstock charge rework is integrated in for the next update. The creature spawning rules have been tweaked to spread the creature more evenly around users. The lance prototyping continues.

We also have reduced the network traffic as entities move around and are working on further reductions. The borderless window mode requested by users is being investigated. The bot testing continues to help us scale users per server. Adding support for multiple characters continues to progress.

Code - June 30th
This week we’ve continued with the lance exploration, prototyping various behaviours to find what feels good. The challenge is finding a solution where melee combat physically feels like you’re impacting with creatures, and this is a big challenge for a client-server predicted configuration. We further tweaked the creature spawning logic.

Core support for the Contracts feature is being implemented. The Feats and Journal screens are being worked through as well as richer item information.

We added further feedback to portals on their state and added logic to detect whether the server has too high a latency to play on. The Sanctum now allows you to go to another world if the one you were on is down.

The support for multiple character continues. We’ve been optimising the server with the goal of getting more users and creatures on the servers.

Code - July 7th
We spent two days on a bug blitz to clean up many of the common issues. The fixes were rolled out in the update on the Steam Testing branch.

Creature spawning continues to be reworked, with the goal of getting more creatures per user with better discoverability and distribution. To make melee combat more engaging the creatures now push users which stops users walking through them.

The GUI continues to clean out the old GUI components and the Journal screen is being expanded. The multiple character support back end is nearing completion.

We continue to profile and optimise the server code to allow increased number of players and creatures. We are also optimising the network traffic to make the case with larger entity densities work well for users.

Code - July 14th
The game was updated to bring over the features that were previewed in the Testing branch.

The creature spawning logic rework continues. We also fixed some issues that the creature-user pushing showed up.

The GUI work is mainly focused on the Journal screens. We are also cleaning up some of the back end of the GUI now the old GUI is almost replaced.

We continue to optimise the servers to get more users on a world. This has included optimising game systems such as the physics, as well as changing how the data is stored. We are also optimising the network traffic, especially for cases where large amounts could be sent. The multiple character support back end is almost completed.

Design - June 23rd
This week has been mainly focussed around reacting to the live release, and building and polishing up features for the next release.

Luke worked with Andy to fix up some issues found in the tutorial and objectives, and then carried on with phase two of the updates objectives – Feats and Contracts. Feats are background goals which reward you for long-term play and Contracts are “missions” that you can select, customise, and then complete for rewards.

Ollie has worked re-balanced the recipes for the beginning of the game to improve the experience for new players. He’s also tweaked tool and block placement ranges to make them consistent and interesting.

Rob has been updating the Journal section of the interface which covers the various types of objectives, including working on the design for the Feats screen. He’s also been fitting the weapon and tool attributes into the item tooltip. 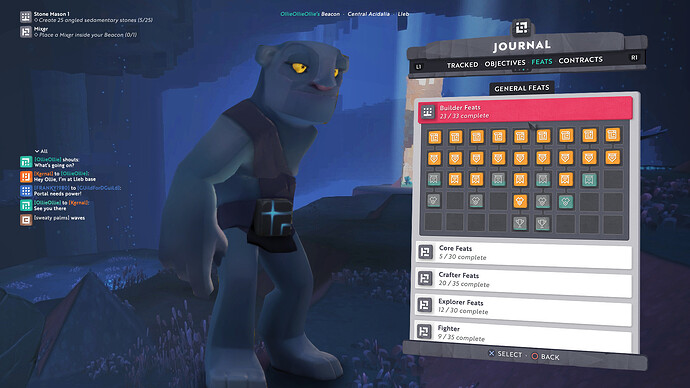 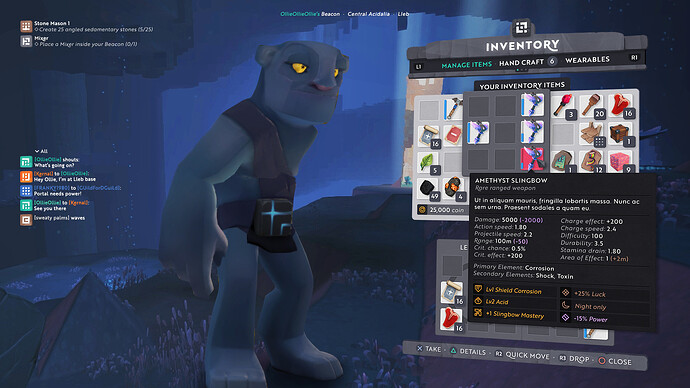 Design - June 30th
This week Rob has finished up the design for the Journal screen with daily and weekly feats added and updates to the objectives and tracker tabs. He’s also been working on the flow for when servers go offline, and how the warps and portals react to that. 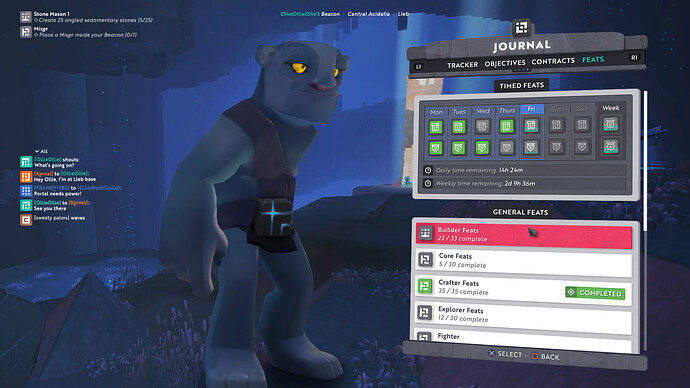 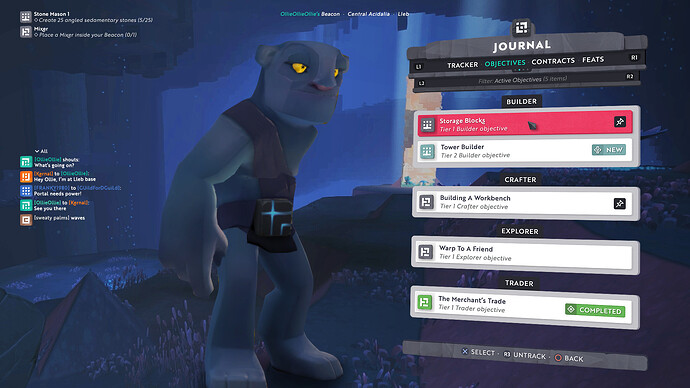 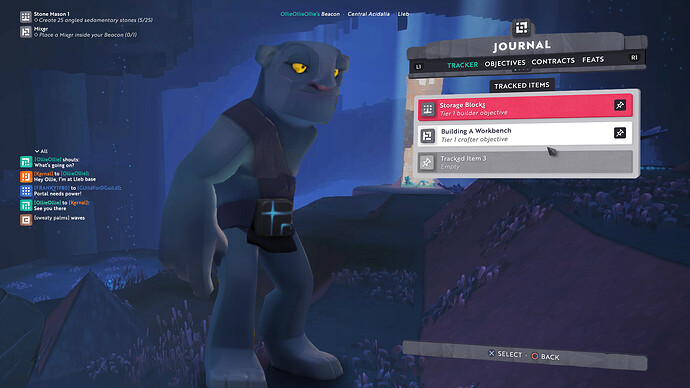 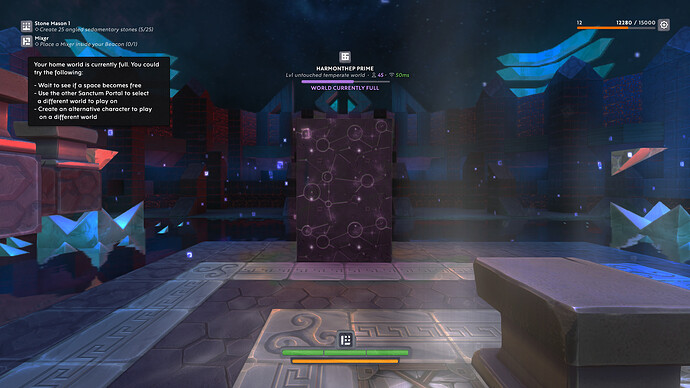 Luke has been building more data for the Contracts, while continuing to tweak the Feats and Objectives.

Ollie has been mainly doing project management work, writing dull documents, and working with our issue tracking software to keep on top of where we are with the project. Boring!

Design - July 7th
Ollie has been working on balancing multiple areas of the game, including the various status effects we have in development as well as improving the initial experience of the game. He has made changes to a number of recipes and the speed and performance of a number of tools and weapons.

Luke started the week working on the Contract system with Andy to develop a prototype for the procedurally generated quest system. He also added some new objectives to highlight our chisel tool and using the sanctum when a player is stuck. For the remainder of the week, Luke was working on improving the current threat system as well as the stamina system.

At the start of the week Rob worked with Marc to implement the new Feats GUI as well as the new presentation for Weekly and Daily Feats. Rob then moved onto the creating mock ups of the contract GUI and how players would interact with the contract GUI.

Design - July 14th
This week Ollie has been spending time balancing the creatures, including their damage and health values, as well as the logic that chooses which variants are on each worlds. He’s also been working with Fooksy on improving the logic for spawning.

Luke has been working on designs for the stamina system and the creature aggro system. He’s also fixed an issue with the hopper collision. 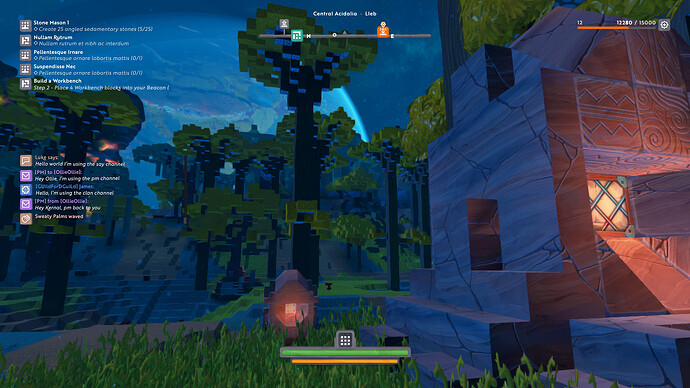 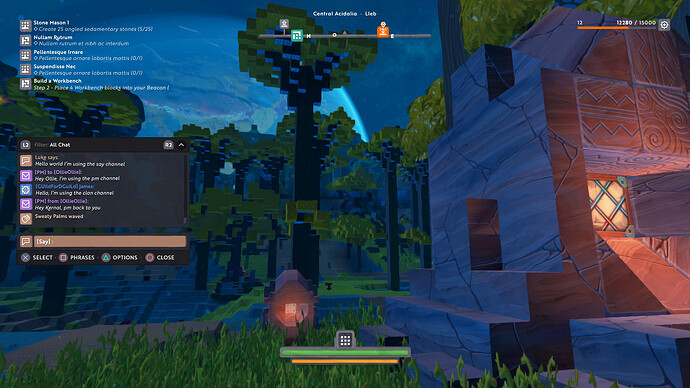 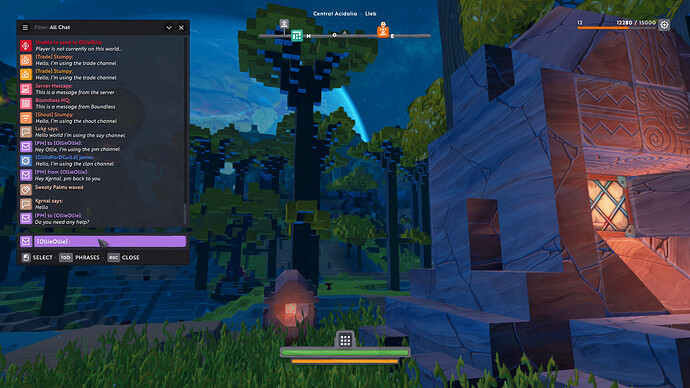 Art - June 23rd
The art team has been a bit light this week with Amanda on holiday but we’ve been busy supporting and playtesting the live release and working on natural props and lighting amongst other things.

Jess has continued modelling our library of natural props and natural resources. Last week you saw the cactus, this week here’s a rockstack and a coralesque formation. 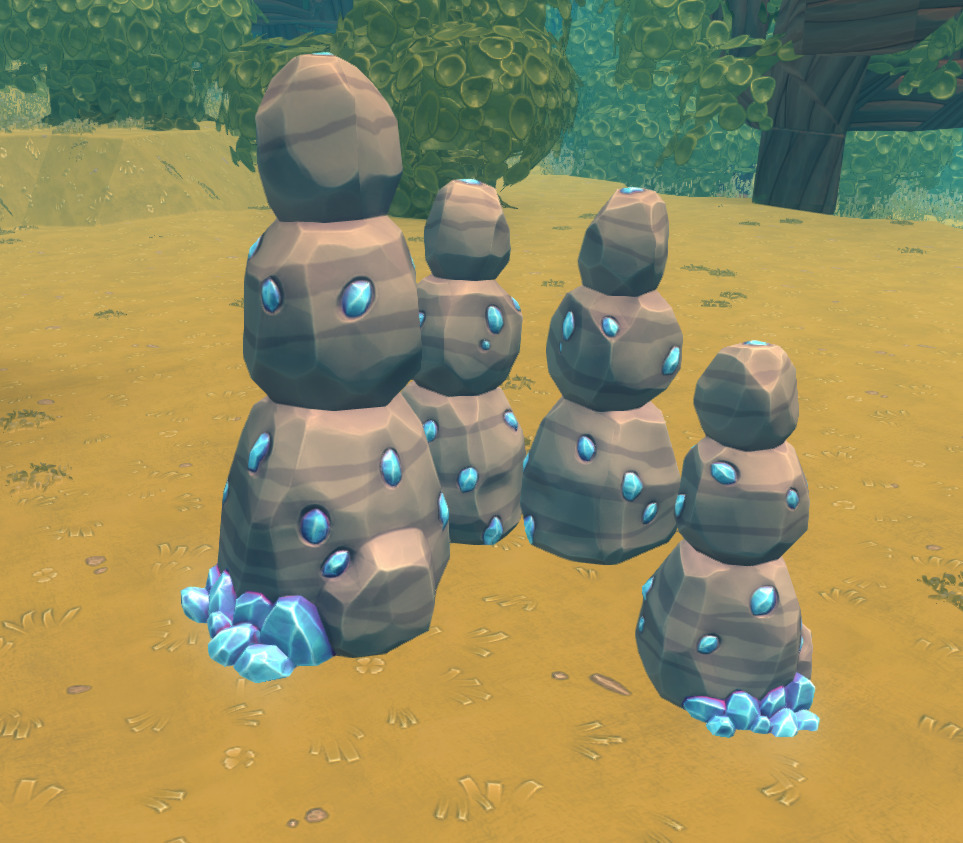 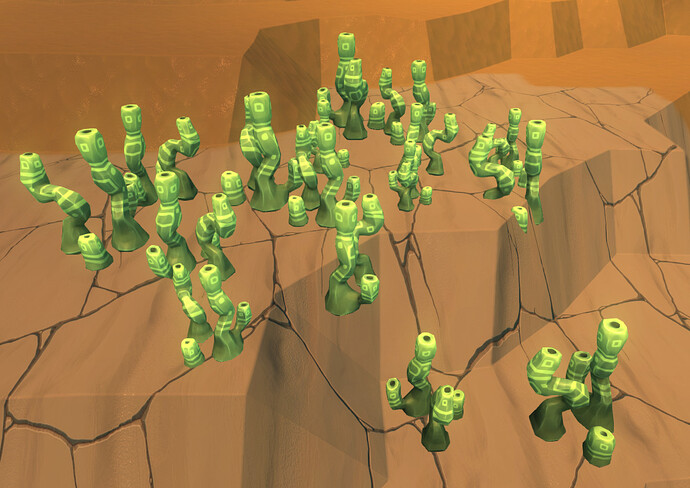 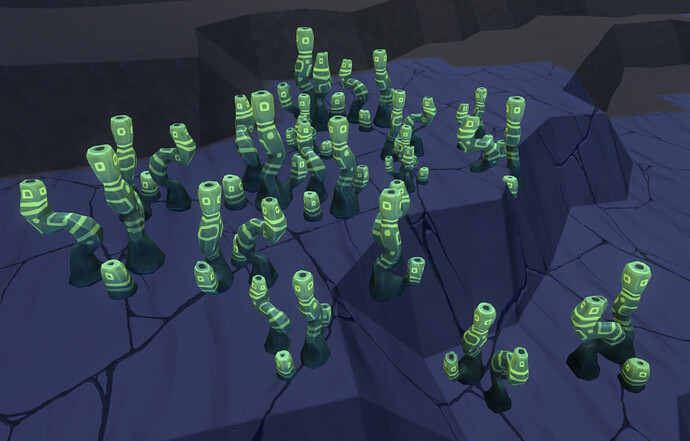 It’s quite minor but she’s also done a test clean up on the resource seam decals. We think it’s a definite improvement. 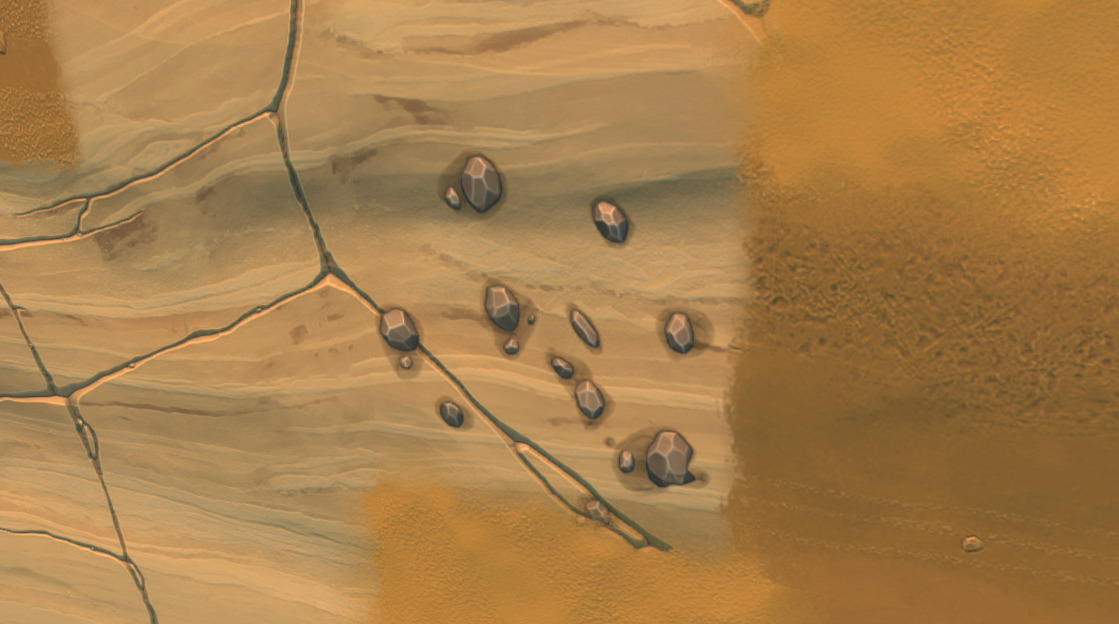 Jim has been iterating the lighting day/night cycles of Therka and Munteen. The other worlds will also have a polish pass next week. The effect in the distance is softer with fog lighting added and the sunsets are more dramatic. 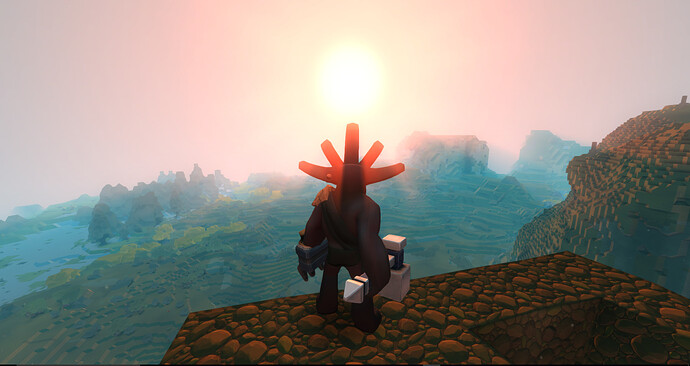 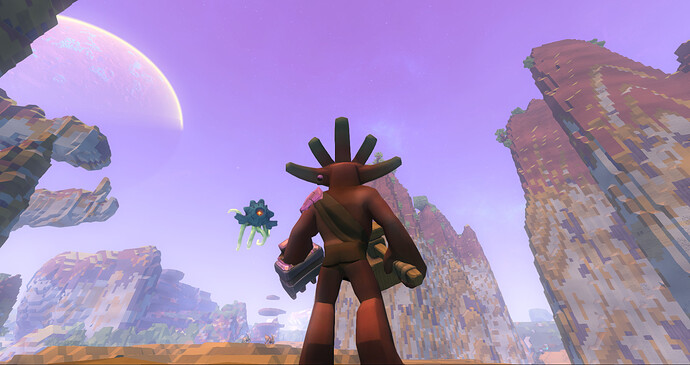 Jim has also been supporting Fooks on the Lance prototype and also working on the new Sanctum.

Art - June 30th
This week we’ve been a bit light in the art team with sickness but we’ve continued working on cool features.

Jess has been looking at different ways to approach our block texture blending. No firm conclusions to share yet but we will continue looking at this in the coming weeks. Many of the blends don’t match their material structure and need customising.

She has also been working through our library of natural props. This week she’s produced: 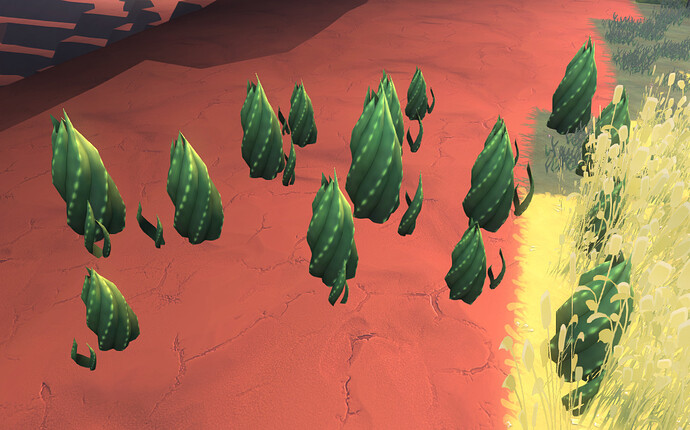 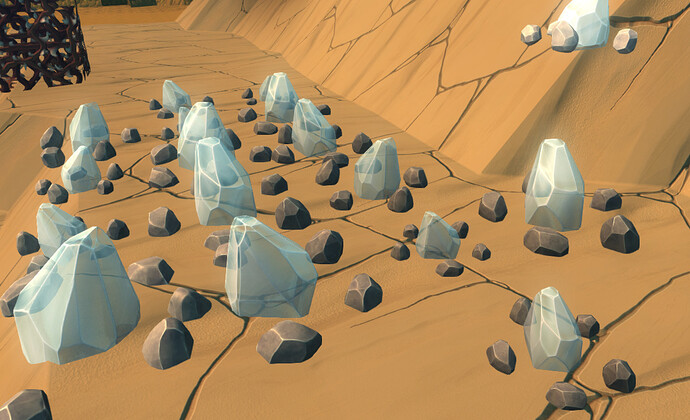 Jim has been supporting Fooks prototyping the lance. We’re generally happy with the feel of this new melee weapon. After some further review and balancing we will go into full art production on the final lance model tiers and a final animation pass before sharing with you.

Jim has also continued working with Luke on pre-production of the new Sanctum. We’ll be iterating this over the next few weeks before we go into full production.

Art - July 7th
This week the art team has been busy with the Bug Blitz and working on concepts, natural props, animation and lighting.

Amanda is nearly there on the core parts of decorative poles concepts. Here’s her latest with images also showing construction and placement ideas. The aim is to give everyone a toolkit to play with rather than single usage models. 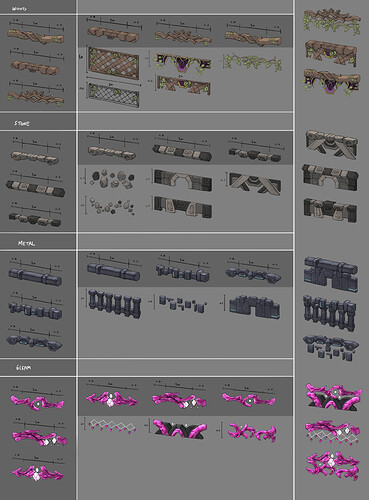 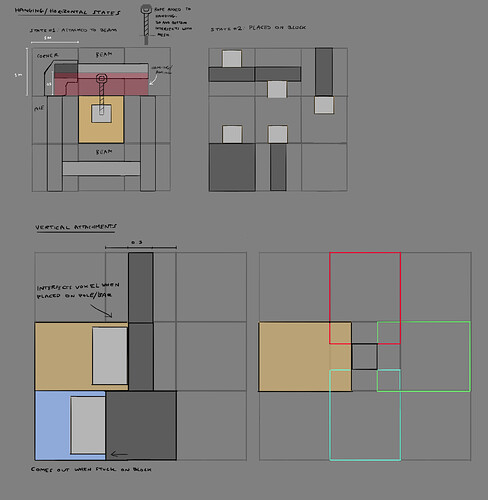 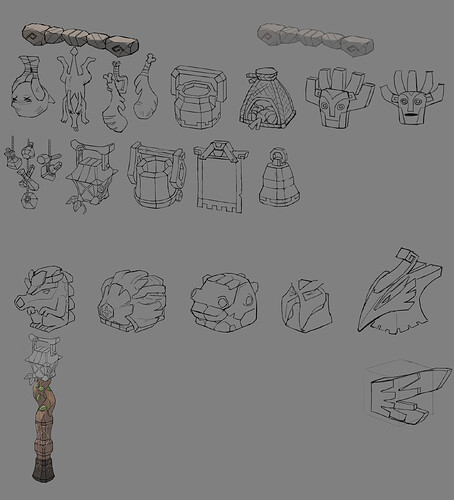 Jess has made snowdrop and scattered fungus natural props models: 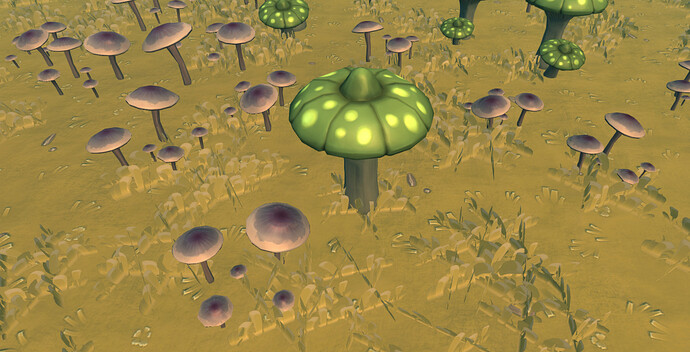 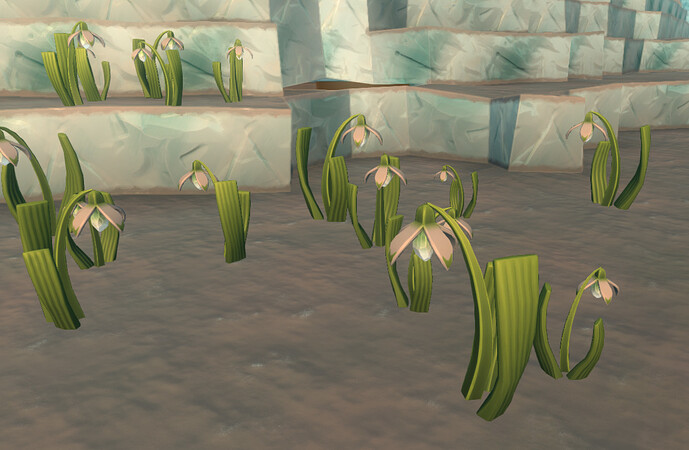 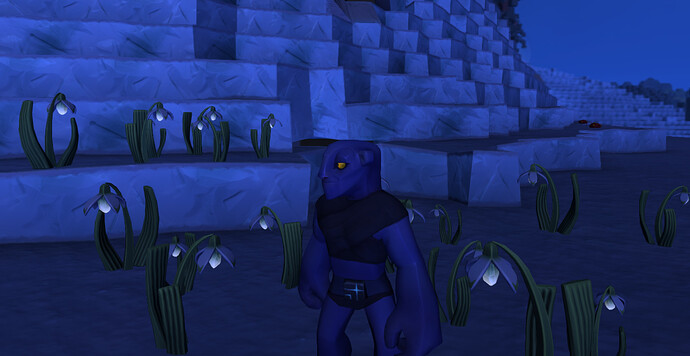 Snowdrops in the dark

Jess has also been experimenting with new wildstock colours. Here she’s added some new wildstock colours (just base and aux colours, not decals). This is an exploration to understand how colours should be generated in the future so that creatures fit into their highly varied environments and worlds. 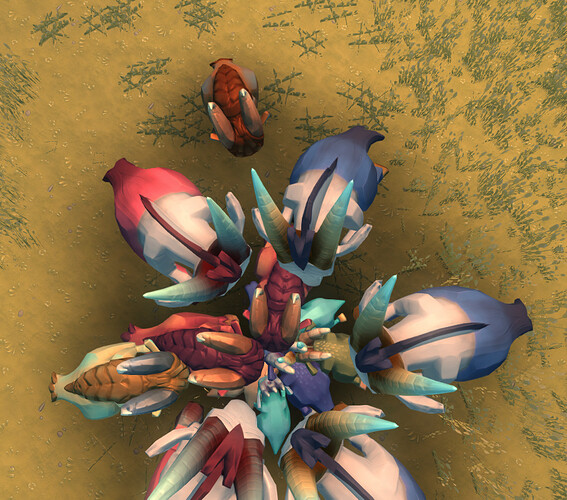 Art - July 14th
This week the art team have been working on decorative props, natural props and lighting.

Amanda has continued her decorative prop concepts. She has shared a detailed post here:

Hello guys, it’s been a while since I’ve updated with concept art. For the past few weeks I’ve been working more on the decorative pole system which had eventually narrowed down to four distinct themes based on the material they were constructed of. Poles As a recap, these are the four themes: [image][image][image] [image] *Gem is now gleam For the first part, I’d experimented on the horizontal pieces, which can be attached to the vertical poles. There are two parts to the horizontal piece…

Jess has continued with natural props: 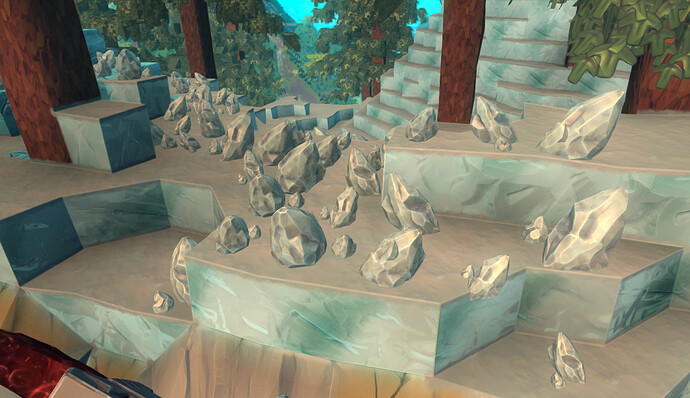 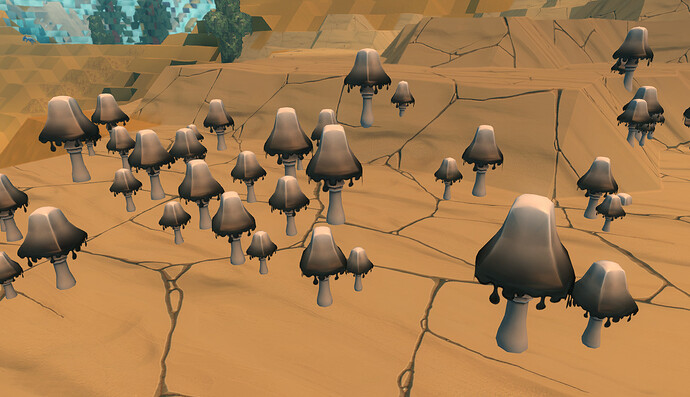 Jim has been updating the lighting for all the worlds adding slight fogging and reducing colour saturation levels to achieve a more pleasing result. This will be going into the game in the next few weeks.

We’re spinning many many plates!

Wow! Now that is a very very impressive update to say the least!

I knew some of that was coming … I just didn’t realise there was so much … more! and how awesome it’s all starting to look (and that’s on top of how awesome it already looks)!!

Thanks for the incredibly substantial update @james! And thanks to all the other developers contributing on the code, art, and other design aspects for the game! I’ve added the updated chat window previews, the new wildstock colors, the softer lighting, the deco pole concepts, and all of those natural prop models to the archive. Thanks again

this is why next week I’m paying for the rest of my Master Package. I just wasn’t sure if I needed a different account with the actual name I wanted, thanks for clearing that up.

The Snowdrops turned out great, @jesshyland!

I’m looking forward to the chat system; it’ll make a lot of these projects run a lot smoother. I have a question though @james; will Boundless on the PS4 support keyboard inputs?

will Boundless on the PS4 support keyboard inputs?

A post was split to a new topic: Current gameplay “feedback”

Yet another massive and impressive update! Can’t wait for the Lance, effects and exotic spitter scum. You guys have been busy!

Oh boy… I wish I could give more likes

I wish I could give more likes