Here at Wonderstruck HQ we are happy to report that we are pretty much finished porting Boundless from the hybrid JavaScript engine to pure native C++. This was mainly done to allow us to support cross platform play between console and PC. It has the additional advantage of improving performance for everyone allowing us to cram even more features into the game and more simultaneous players per world. Any features that haven’t been ported yet we plan to significantly rework, so porting them as-is would have been a waste of time, for example the low flying birds are now gone. (No birds were harmed during this process.)

Next week, we will be making a small update to release some of the final C++ porting features, such as making fluids flow and creatures dropping items.

Thankfully we’ll soon have the entire team working on juicy new features for the next big update. The first step towards this is to release the world regeneration technology which is a crucial feature for an online voxel sandbox. In parallel we’ll be working on the machines and crafting system.

Code
We plan to release Boundless simultaneously on PC and PS4, this is extra important as all players, on all platforms will inhabit the same universe and worlds. The PS4 version is getting close to PC parity. To keep pushing in this direction, we have implemented some new low level PS4 renderer feature to help improve rendering performance as the game is generally GPU bound on all platforms. We’ve also done more work on the game’s shader pipeline that should also help with improving FPS and allow us to get the best out of each platform’s graphics hardware.

We’ve been doing some early secret experiments into getting the Boundless engine running with PSVR, this is in addition to the Oculus experiment we did last year. See our discussion here about the challenges of getting an open world game running in VR.

We are still fixing a few bugs in the C++ version and are porting the last few missing features, mainly the liquid simulation and our basic fx system. These should be ready for release next week.

We have continued to develop the basic wireframe GUI for new crafting and machines interfaces. We’re also putting in some of the groundwork for the machines so they connect up when you place the various machine parts down. We’ll share some screenshots soon in the devlog.

Design
This week has seen lots of creature design work, with many of us getting together to try and choose our 1.0 creature set, and design the systems that they are based on. This is progressing well, but there is still more work to do.

Design work has also continued on the world builder, and on other related world systems such as the rules for generation and regeneration. The hope is to get the tool ready, and then get it into your hands and start the process of making biomes for the game. Hopefully the community is ready and keen to help us create some super creative biomes.

GUI
This week we posted that we’ve been working on the more final GUI system, including a new widget and layout system, improved user flow and set of mesh-based item icons. We factored in a fair amount of community feedback into the development of this design, including switching to a single panel design for interacting between containers (as opposed to the old plan-swapping design). 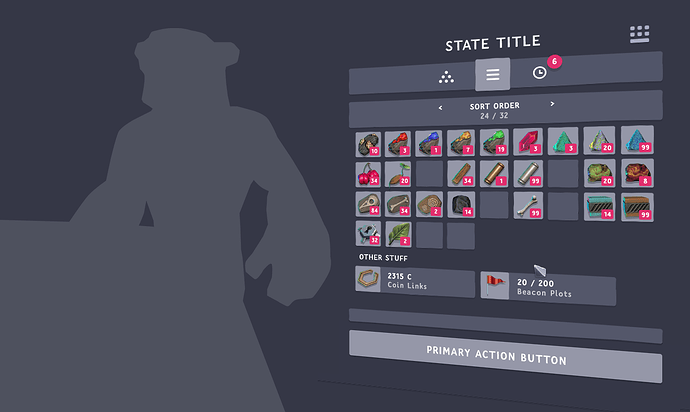 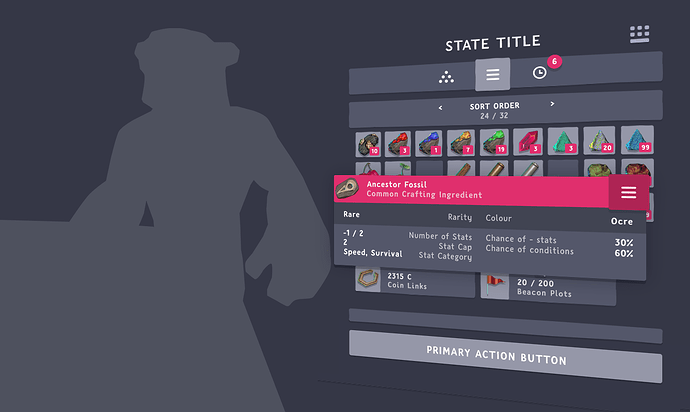 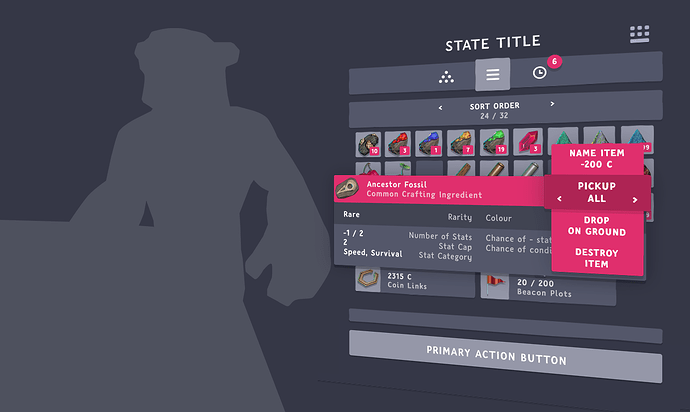 Art
This week we’ve been busy reviewing all the creature concepts and debating our favourites. In addition to all the feedback and preferences the community shared on the forums, we’ve also been picking our favourites. The meeting room is creature-tastic at the moment. We also completed and shared a range of concepts for the Fast Flyer and Large Livestock concept families. Make sure you share any feedback so we can include it in the selection process.

We’ve continued to design and modelled more items this week: fossils, dust, mixture, compact material. Many more items still to come. Checkout the updated items devlog post. These items will be held in player’s hands, sold in shops, and shown in the GUI, so they need to act like icons whilst also being in the main game world.

We’ve also done some visual exploration into how some of the most special materials used whilst crafting the tool and weapon progressions might look in game. We want them to feel really special and look ass-kick. We’re not quite ready to share these yet. You’ll probably get to see them when we share some of the tool progression concepts soon.

Finally, we have also worked on some new prop concepts for the donation box, pay lock and location signal. We’ll share the concept soon.

Just as satisfying to read as the first one, thank you so much for doing these. The reverse leak was fantastic, nice job

Looks good, only thing i not like is the column-use in the popup-window in the GUI, where to the left, the description come after the value. It force me to read from right to left. It break the reading-flow and feels a little strange.
Else it look very good

That all sounds fantastic! … and that is one action packed update!

When the beta worlds are recreated / redeployed for the world regeneration stuff, will the update also include all of the new resource blocks - or will they be able to be introduced by the resource regeneration at a later time?

I keep looking at all those new item images on those GUI screens and I’m excited about what’s in the pipe-line (and scared about the amount I will need to update on the crafting site!). More excited than scared though!

will the update also include all of the new resource blocks - or will they be able to be introduced by the resource regeneration at a later time?

Also quite curious about this. Once containers and items are introduced into this early access, my hours logged will very likely go up by a factor of 100. Not much of a builder, but a HUGE hoarder

On the reverse-leaked (:P) GUI screenshots - have you tested that UI on old crufty TVs? I think that white on bright pink will visually bleed - it might be hard to read

(but it looks really damn good on my screen as is)

Do old crusty TVs have HDMI or VDA ports? My mother’s (that she refuses to get rid of) only has RCA.

Plenty have component (which PS4 does support via adapters)

Good edge case I guess. Still seems weird to be able to afford a PS4 but not a TV that doesn’t require an RCA adapter (like a fifth of the price of the PS4 haha).

[quote=“nevir, post:9, topic:4247”]
On the reverse-leaked (:P) GUI screenshots - have you tested that UI on old crufty TVs? I think that white on bright pink will visually bleed - it might be hard to read
[/quote]japp +1 for that.[quote=“james, post:1, topic:4247”]
(No birds were harmed during this process.)
[/quote]glad to read that … poor little birdies. Hope they are cared and fed well while you setup their new homes.

Thankfully we’ll soon have the entire team working on juicy new features for the next big update. The first step towards this is to release the world regeneration technology which is a crucial feature for an online voxel sandbox. In parallel we’ll be working on the machines and crafting system.

Phew that took some time to read but awesome cant wait

Great Job and nice to see that you are now doing big steps forwards and realize your concepts. I hope a lot that troubleshooting will not take too much time and effort, when you combine all these different aspects to the game. It feels good to see you going on. In the same way it’s nice to know what’s coming soon

I am looking forward for new ingame updates so much now

The resource regeneration is different to the world regeneration as the resources are redistributed following rules described by the World Builder. So they’ll be no camping of particularly precious seams of resources.

So now it’s clear, no camping

or territory protection for ressources…

But can you guys tell us (after releasing your world and ressource regeneration) how fast the regeneration process works? I mean, if a structure degenerates in non-beaconed areas for one block per day (beginning on the top of the artificial structure) and also the regrowing of ground that was taken away. Many questions lef opent here for me…

But can you guys tell us (after releasing your world and ressource regeneration) how fast the regeneration process works?

From what we know that was planned (or at least suggested) is that regen will be variable depending on how densely populated an area is and how often it’s visited. If I remember correctly, it was mentioned that regen would begin about 12 hours after an area was last visited and would be a slow gradual process. I guess it would also depend on the size of the area affected also as it may mean the regen process has multiple starting points.

I think regen may require some fine tuning in game, after initial release, with feedback from players before a definitive answer can be given.

So now it’s clear, no camping

or territory protection for ressources.

… What if you have just spotted a nice cluster of mega rare tinklewinklerainbow gleam and have to go off cuz of work? Would be good to have a temporare beacon then to keep the claim til you are finished with mining the next day … I hope that we will have some kind of “a little bit cheaper” temporare beacons for such efforts

Thanks for the update, @James. I’m really excited for the world regeneration technology, especially now that resource regeneration has been explained. Also, those GUI concepts look AWESOME, I’ll be adding those to the devlog collection shortly.

Overall, I’m happy to see that we’re finally moving along