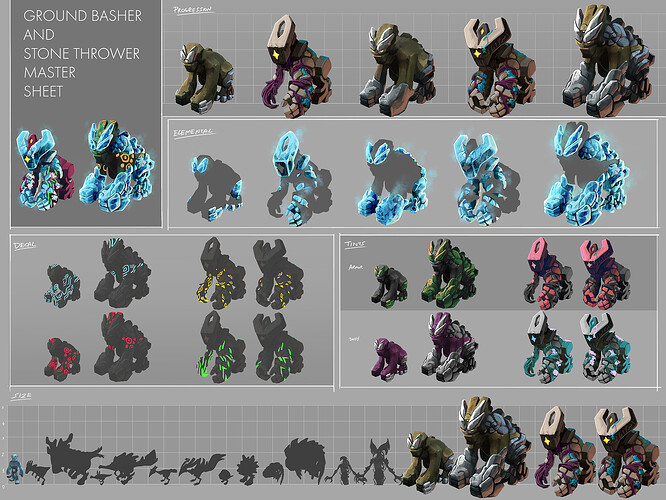 These are powerful creatures more likely found on middle and high threat worlds. They can be found alone or in small groups, wandering and playing idle animations. When agitated they attack enemies within range, making no attempt to dodge attacks. If enemies move away they move towards them to keep them in range. There are two distinct variations of this ‘Ape Like’ creature, the Ground Basher and the Stone Thrower. The Ground Basher pounds the ground causing a shockwave which move forwards through the ground destroying blocks as it goes before exploding when near an enemy. The Stone Thrower rips blocks from the ground and throws them at enemies. Both variants also have a powerful melee attack which they use if enemies move near to them. They are hard to kill, and we want to experiment with a timing based mechanic for damaging them.

Animating to scale and how it affects our visual designs

The ‘Ape-like’ creature is certainly one of our most complicated in terms of the implementing side of creating animation and ai.

We have literally a 'big’ vision for creating this massive brute of a creature and he’s essentially the last of our initial batch because we’ll need to work up our ai base to realistically implement him correctly with a more complex ai sophistication relating to his size.

The first thing you’ll notice is the scale to which we want to aspire to achieve. Towering over the player, I’ve animated the Ground Basher and Stone Thrower to be impressive in scale and that essentially fits his character.

It should be interesting to point out the original ‘Ape-like’ creature does two very different things ‘bashing the terrain’ and ‘throwing blocks’ and these two different animated behaviours resulted in progression to be shared between two different visual species ‘The Ground Basher’ and ‘The Stone Thower’.

We therefore created 3 tiers of classic progression shown in order of tier 1, 3 and 5 according to scale on the Concept Master Sheet.

Each tier has a freedom of increased or decreased scale done in the code(within reason for the ai) and more armour/protection applied to his mesh to show his difficultly in Combat.

Although the Stone Thower shares a lot of behaviours with the Ground Basher, throwing the actual blocks in our Sandbox environment (which is our goal), adds a lot more complexity.

For a start, it would be very difficult to apply scale to these creatures because of his animation set. Picking up blocks has various contact points that would scale too uniformly and that therefore would create a whole load of visual errors breaking the illusion of his animations.

The Light Thrower, throws a singular 1 meter block with an action a bit like a baseball pitcher with his strong arm!

The Heavy Thrower, on the other hand, throws a whole mass of block with both arms sharing the load.

All of this information is considered as part of their conceptual design.

So we’re now delving into the crux of main reason for defining a different mesh for this particular variety of ‘Ape-like’, for the Stone Thrower is a Ranged Creature and that contrasts the Ground Basher who is a Melee Creature.

Finally, I have one last piece of artist vision to share with you all for the creatures that links them even more to the World of

Like in reality where some mechanics have been inspired by nature’s natural design, so have the Boundless weapons, tools and ammo taken inspiration from our creatures and terrain.

The Slingbow in particular, is linked to our all of our ranged creatures within different degrees of visual importance relating to how aggressive their combat truly is.

All of this adds to the idea the Stone Throwers are a more evolved species than their meat-head melee counterparts the Ground Bashers.

Too much blue guys

Amazing to read how much thought you put into every detail of the visuals of each creature. Impressive!

They are hard to kill, and we want to experiment with a timing based mechanic for damaging them.

One thing that would (imo) suit these creatures very well is if that mechanic would ensure that it can’t be taken down by a single player.
Something like “Can only be damaged from behind right after a ranged attack”. So you’d need one player at distance having ‘aggro’ and dodging attacks, and another player timing his attacks behind the creature until he gains ‘aggro’, meaning that he has to go at distance which makes the players switch their “roles”.

The first post regarding the ground basher featured a picture of a corrupted version of the creature.
Did you discard the concept of 'corrupted creatures or is it simply something you don’t want talk about yet?

Yeah, it’s actually neither, it’s more of an initial concept that got evolved into this much larger designed system that you now see before you.

Claudio and I basically originally loved for a ‘corrupt’ version of the Basher to have gems on his hide that related to crystals and gems found in the Biome that they inhabit. We also wanted a variety of behaviours that would result in different lines/patterns of destruction to form on the ground as the Basher causes more complex block damage for the player to cope with in Combat.

That creative process turned into Progression, Elements and Exotic creatures. The gems part is now a part of this intrinsic Element system, the variety behaviour is shared between Tiers of Progression and Exotic attributes.

I guess you could say out new corrupted Basher now looks like this. 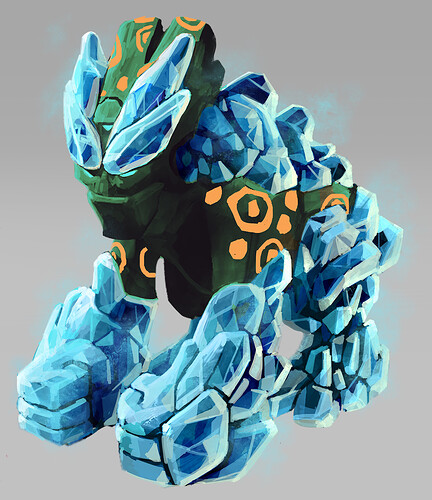 Hiyas, the blue part links to the Sapphire (Chill) Element… there are others of different colours.

The ground basher is by far the most awaited creature by me. Can’t wait to see him giant voxel shockwaves accross the landscape, punching crates into them.

One thing I wonder, will they respawn slower then world regeneration around them? Else I imagine finghting them in the same place several times can create deep holes in their spawn area.

I imagine a guy half an our just dodging the block throws… how does the place on which the thrower stands look like?

when will the update come out with all this new stuff

There’s just been a big update with a whole bunch of new stuff (and several bug fixes which the devs are fixing as quick as the community finds them!). The creatures of Boundless, as far as I know, will be one of the next things in the development pipeline.

Sorry I can’t give a more definitive answer than that!

Edit: Here’s the update thread with the big release info on it… Testing 22: Warps, Planets, and more!

Worth having a look at the other dev logs though so you can see what else has been updated since then!

thx man im deciding whether to buy this game now or wait until 1.0 it’s really expensive

Buy now would mean you get to see things as they’re added, give feedback and suggestions on the game as it develops, but you won’t have a consistent, bug free gaming experience (it is still in development after all!).

Waiting until 1.0 would mean that you would get to play on a much more stable version of the game with a lot more content and active players, but could mean that you have to wait until early 2017 for the release.

Buy now would mean you get to see things as they’re added, give feedback and suggestions on the game as it develops, but you won’t have a consistent, bug free gaming experience (it is still in development after all!).

Also, you should expect any builds/progress you make between now and 1.0 to be periodically wiped (hopefully not that frequently, but the devs can’t make any promises)

Is it wrong to necro these awesome creature devlogs?

Really hyped to see these in game eventually.

Seconded about this, and the few creatures to the left of them, including the demon looking one

Seconded about this, and the few creatures to the left of them, including the demon looking one.

The creature to the left is The Hunter.

I would love to see these in-game too. Are they still coming?

Ignore that! For some reason I thought this was the Hunter thread!

I’m sorry for the bump, but I’m really curious about what happened to these chonkers. They’re so impressive-looking - Especially the ones that look half-cuttletrunk.

I remember seeing them in an older trailer a few times, actively being fought.
Saw the Hunter in one briefly, too, but it wasn’t fighting.

I hope these two big boys are coming back to town soon, so we can have fun with them, though I do understand there’s probably more pressing or important matters to sort out…